A virtual Guild Meeting will be held on June 10, starting at 6:30 PM, featuring George Hart.  George will share his experience participating in the September, 2020 Weaving By The Sea workshop in Spain.

We currently anticipate (1) Introductory Remarks by Guild President Vicky Nickelson, (2) Share and Show, and (3) the Featured Presentation by George.  The meeting should last about 90 minutes.

NOTE: This Annual Business Meeting was not held, due to COVID-19 concerns.  Instead, an election was held on-line by the general membership to approve the nominated slate of new members to the Board of Directors.  This election was announced in the April Guild Newsletter and by email via eNews.  Voting was active from  4/5-4/24/2020, resulting in unanimous approval of the slate.

The Annual Business Meeting is held the same night as our regularly scheduled March Guild meeting. Vivien Sharples, Joan Gallagher and Sue Van Wassenhove will be nominated to and voted on by the Guild Membership as new Board Directors. There are no other matters currently proposed for Guild Approval.

There will be no other presentations that night, except for show and share which will take place while the Board meets. Please bring baskets to share (from recent retreat or workshop or home); discuss techniques and materials for those less familiar.

The Board consists of at least 9 Directors, each serving up to 2 three-year-terms and elected by the Guild membership at the Annual Business Meeting; the Board of Directors elects specific Officers (President, Vice President, Treasurer, Recording Secretary, Corresponding Secretary) from among its ranks. 2019 Board Directors were, David Chambers, Jill Green, Joyce Lem, Jenny Lidington, Karen Engel, George Hart, Vicky Nickelson, Lynne Nork, Gay Vogt, Richard Vogt. For 2020, Jenny Lidington is stepping down as a Board Director.NOTE4/i

February 12, 2020 : Dorothy McGuinness - The World of Conference, Galleries, and Exhibits 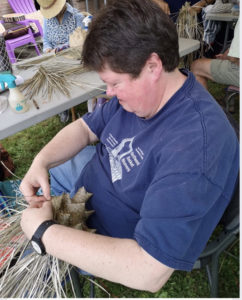 Dorothy McGuinness will share her extensive knowledge on conferences, galleries, and exhibitions.  Conferences she has attended include the one that started the National Basketry Organization in 1999 and was hosted by the Handweavers Guild of America, as well as the latest NBO conference in Bowling Green, Kentucky.  She will talk about her experiences at these conferences, and what to expect if you are thinking about attending one yourself.

Dorothy will also talk about entering juried exhibits and dealing with galleries, including where she finds exhibits and galleries to show her work, and the drawbacks and pitfalls to look for when applying.

Winter is the best time to do the hard work of transformation, especially if you are a Western Red Cedar Tree. This is the season when the layer of leather-like inner bark, that generations of Salish weavers have gathered each spring, will become a layer of wood, in a growth-ring that may one day be counted.

Melinda West will share a presentation that highlights some of the transformative experiences and lessons she has learned from the plants, and from her students, over the nearly four decades of sharing the art and culture of plant fiber weaving.

Melinda will take us on a short power-point journey through the seasonal round of gathering materials, with examples of how those plant materials can be used in various projects to help students gain skills, have fun making things, and develop their knowledge of culture, science and art.