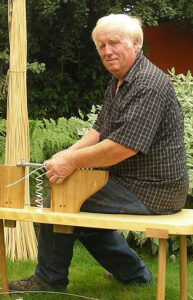 Explore German skeined willow through the experiences of Bill Roeder. This is a process that is not typically taught outside of Europe. Bill’s first exposure was in Canada and in order to continue skeining he had to adapt Japanese bamboo tools to work on willow. After many years of self-study and tools development he went to study with the masters in Europe. This led to an obsession to obtain more knowledge. Bill’s presentations will explore the techniques of skeined willow, including; growing, peeling, drying, tools and weaving. 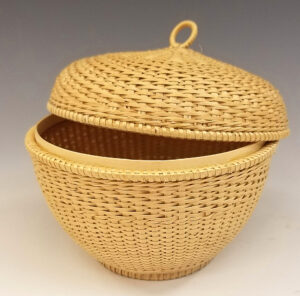 Please join us via Zoom on June 9th to learn about this uncommon, but traditional weaving technique.  Bill is looking forward to your questions. 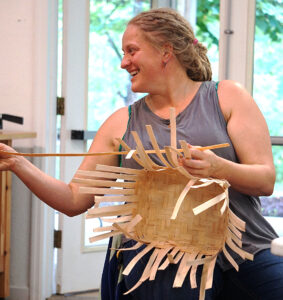 In the Fall of 2020, Kadey had the rare opportunity to be sequestered in a beautiful Southern Appalachian mountain valley with 8 other craftspeople and the master craftsmen who came to teach them.  Under the tutelage of master weavers Bill and Mary Ann Smith, Sue Williams, and Betty Maney, Kadey immersed in traditional Appalachian White Oak basketmaking for the month-long Traditional Craft Mentorship Program at the John C. Campbell Folk School.  A truly awesome experience.  In this program, Kadey will talk about her experiences as a mentee; a bit about the history of the region and of the John C. Campbell Folk School; and the process and techniques of turning a log into a basket. 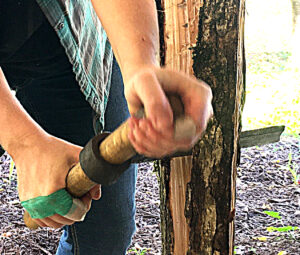 Kadey Ambrose is a Guild member and student of The Evergreen State College where she studies basketry by incorporating the fields of botany, ethnobotany and studio art. She currently resides in Olympia, WA.

“I began by experiencing both independent study of fiber and basketry structures as well as traditional fiber art at San Diego State university. For me there is inspiration in nature, life’s events, and words.  Choosing fiber to build my sculpture, enables me to find the flexibility, undulation, and the tactile nature of both natural and industrial salvaged materials. Woven shapes and forms are made to convey and suggest relationships and communicate experiences of substance and environment.I use a multitude of hand weaving techniques that are ancient practices and yet they guide me to contemporary expressions, with tactile abstract surfaces and earthy color.” 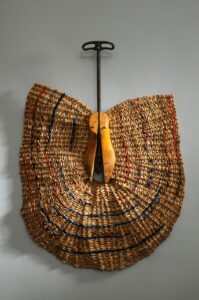 Learn more about Polly’s work from her website: https://pollyjgfiberart.com/

HOW TO JOIN THE MEETING:  Access Information will be sent by Guild eNews on Friday, April 9.

From the Guild Handbook, p12, Article VI Sec. 2:  “An annual meeting of the members shall take place in the month of March; the specific date, time, and location of which will be designated by the Board. At the annual meeting, the members shall elect directors, receive reports on the activities of the association, and determine the direction of the association for the coming year.”

On Wednesday night, March 10th at 6:30pm the Guild will hold our Annual Meeting via Zoom. Come and hear about the state of the Guild. We will discuss such things as the financial health of the Guild, the status of membership, and give an update on the plans for Retreat. We will be asking for questions and input from the audience.

After the vote the Board will break away from the general meeting for a few minutes. During this time, Barbara Osborne and friends will give an update on the “Shelter and Share” project. There may even be time for Show and Share, so be ready.

The evening will conclude when the Board returns to present to the membership your new slate of Officers for 2021.

Please join us on March 10th to stay up to date with your Guild and vote for new Board members.

NWBW BOARD ELECTION, DETAILS:
During the meeting we will have our annual changing of the guard on the Board of Directors. This year three members will be leaving the Board and we have four candidates to join the Board resulting in a total of 11 Board members. This meets our Standing Rules recommendation of 9 to 12 Board members. However, before the vote the floor will be open for any additional nominees. If this results in more than 12 potential Board members, we may ask if any nominees wish to withdraw before the vote.

For a list of current Board members and their term status and duties, please see p7 of the Guild Handbook: http://www.nwbasketweavers.org/nwbw-membersonly/NWBW_2020_Handbook-Directory.pdf .

Leaving the Board this year is Karen Engel who is at the end of her second term and is required to leave for at least a year. During her time on the Board Karen served as our President. She will continue to stay on the Merchandise Committee and is in need of help with sales during events, so please think about it.

Also leaving is our current President Vicky Nickelson. Vicky has served for two years as our President and is at the end of her first term. She is leaving the Board to concentrate on her move to be closer to family.

Our third member leaving the Board is Joan Gallagher. Joan is our current Recording Secretary who was lucky enough to get a job in Hawaii. Unfortunately, because of the time difference between Hawaii and Seattle she is unable to attend meetings and has decided to step down.

During the Annual Meeting we will conduct a vote for our four new Board nominees. Below is some background on each of them. We will vote for these nominees as a group and not by individual.

Becky Drew
“I live on 2 acres in Yakima with my husband, two hair sheep, and 3 cats. This has been home since 1994. I met the welcoming “Ditch Ladies”, our local basketry group, soon after we arrived in Yakima. If I can contribute to welcoming and encouraging others in basket making through being a board member I look forward to the opportunity.”

Willie Ziegler
“Hi, I’m Wilma (Willie) Ziegler. I currently live in El Cajon, California (East San
Diego county). I lived in Seattle from 1959 to 1999. I have been a Guild member since either the 3rd or 4th year it existed. I am an eclectic weaver interested in all types of techniques and materials. I enjoy classes that teach me something new, and I enjoy teaching to pass on what I have learned.

“Other than being a royal pain in the butt I don’t know what else to say. Oh, I have been President, Recording Secretary, and Treasurer for 12 years, and on various committees.”

Cathie Harper
“Hello. I am Cathie Harper from Yellowknife, NWT, Canada (62° 27′ 13″ N Latitude). I have been making baskets since 1996 and I’ve been a member of the Guild since 2007. I have attended most Retreats since 2007 and have taught at Retreat since 2017. I have been on the Retreat Committee since 2019 and on numerous Arts and Crafts boards in the NWT. I have thought for years that I would like to participate on the Guild Board and with the advent and success of Zoom, I now feel that I can.”

Beth Breakey
“I joined the Guild sometime in the 1990’s. I was encouraged to join by Mary Barrett after many get togethers in Yakima with “The Ditch Girls”. I am now retired, living in Alger, Washington, and looking for a way to give back to the Guild. I am a retired CPA and I hope that my accounting skills will be a benefit.”

Please join us on March 10th to say thank you to the members leaving the Board and to cast your vote for our Board nominees. 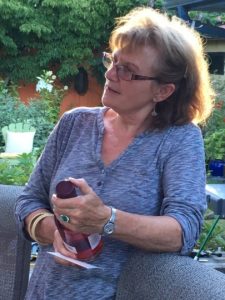 It all started in 1998 when Fishsticks led the Basketmakers’ Tour of Japan.

The joy of connection in faraway lands has drawn for her a mosaic pattern of learning and exploring; a map of discovery and friendships from shore to shore.  Each journey has left its mark: materials, history, technique, tradition, energy and a sense of place. In each, Judy has shared the magic of our own Pacific Northwest–the tradition and the innovation we exemplify as ambassadors.  A blessing it surely is: the generosity of makers hands and hearts.

Most recently, residencies in Australia took Judy deep into two very different landscapes, one a rainforest of abiding rhythms, traditions and culture; the other a bright stimulating academic scene devoted to the arts and exploration. Come join Judy from home as she shares pictures, stories, and some lovely memories until next years’ travels to the land “down under”. 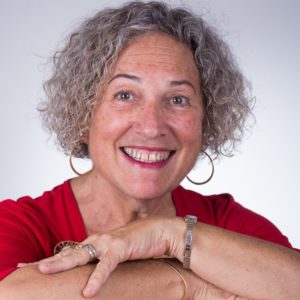 I call myself a sculptural basket maker.  My work focuses on transforming common materials into innovative, urban vessels that reflect abstract ideas, including societal excess and throwaway consumerism. I strive to give the viewer a process of discovery. What at first seems like conventional fibers may turn out to be a subtle arrangement of piano innards, shoulder pads, forks, curlers, spools, or my favorite, cable ties.  I believe anything can be basket material.

My goal is to create contemporary interpretations of a tradition craft using non-traditional ingredients. Thus, I can explore the concept that even objects we take for granted can become works of art. My pieces represent the eternal truth that wonder can be found anywhere and everywhere, as long as you remain open and determined to find it.

Everyone, we are having the traditional potluck and gift exchange for our November 11th meeting.  However, since we are having this meeting via Zoom you are on your own for potluck choices.  Maybe a small selection to nibble on during the meeting?

The big event of the evening is the virtual gift exchange that has been orchestrated by Barbara Osborne.  A total of 36 members, including one of our newest members Cael Chappell, have agreed to participate.  All participants will have received their unopened gift before the meeting.  During the meeting we will see the look of surprise, or confusion, on their faces as they open their gift in front of us all.

Please join us on November 11th to catch up with old friends, make some new friends, and find out what everyone is up to.  Then kick back with some snacks and watch the gift exchange extravaganza! 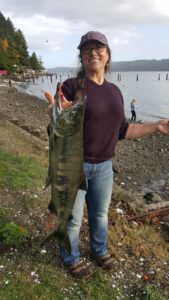 Fish skins are an amazing resource that are often overlooked as a basketry material and simply discarded as waste. Who knew that they could be utilized to make unique and beautiful baskets! Join us online to learn how to prepare and cure this amazing weaving material.

Northwest basket weaver Karen Sherwood shares the process of fish skin curing, which she learned from Athabascan basket maker Audrey Armstrong while visiting Alaska. The program will begin with a slide presentation on salmon skin basket making followed by a demonstration on the process of fish skin preparation and curing. Karen will show samples of different types of skins she has cured as well as a display of her baskets showing the unique, new direction she has taken this old tradition.

Cael Chappell’s basket making grows from his love of basketry. Seventeen years before weaving his first basket, Cael founded Baskets of Africa, a fair-trade company committed to economic empowerment for basket weavers from over 15 countries. Traveling across Africa to meet weavers, Cael discovered that basketry is as diverse as it is universal. After years of commitment to the art of basketry, Cael wove his first basket in 2017. He is inspired by global weaving traditions to create his own unique baskets.

Please join us on September 10th to hear Cael talk about his Baskets of Africa project, selling over 25,000 baskets a year, and how it inspired him to begin making baskets himself. The meeting will be virtual using the Zoom App.